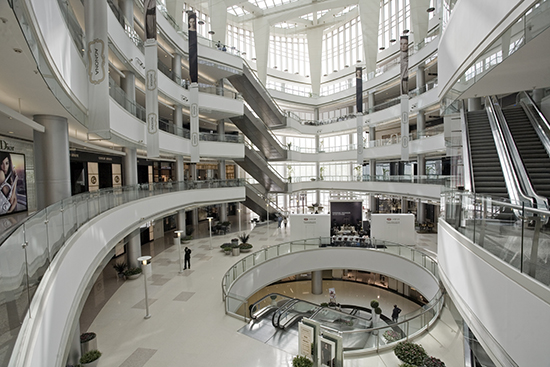 The Future of the High Street

What does the future hold for the high street? It is a question that has, for the best part of half a century, resulted in a great deal of hand wringing but little in the way of meaningful answers. Now, we are at a moment when this question is more pertinent than ever. The planned closure of over one hundred Marks and Spencer’s stores has thrown the idea of what the soul of our high streets might be into sharp focus, combined with some rather nihilistic predictions about its future. 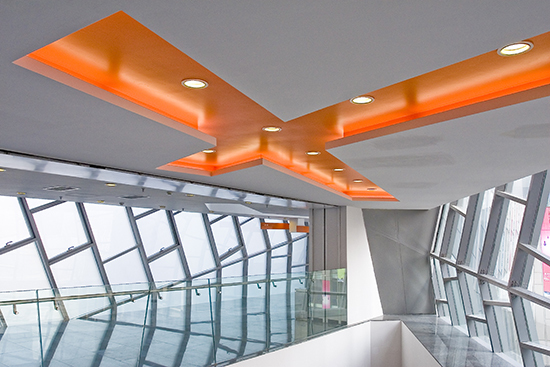 For the more negative commentators out there, the disappearance of a high street anchor store heralds the beginning of the end. Aldershot high street has been cited as a typical example of this. In 2015 its Marks and Spencer’s closed. Since then it has failed to secure a replacement anchor store, and therefore footfall for the smaller shops. And in response, the remainder of the high street has diminished considerably. If the logic behind the commentary is followed to its conclusion, the ‘failure’ of Aldershot high street can be found in the design of the supposed nemesis of high street’s everywhere: the shopping mall. 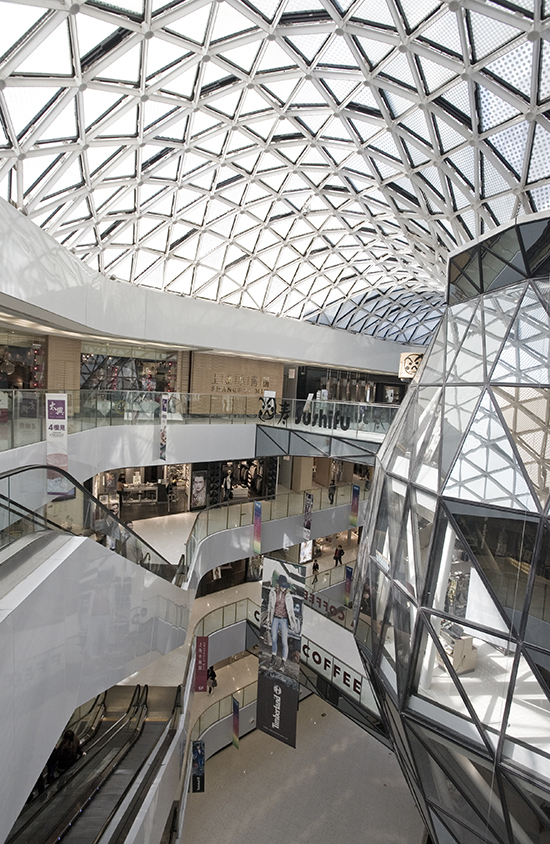 Destination versus impulse is the principle that applies here, one that, in the case of the shopping mall, dictates the presence of a nationally or internationally recognised anchor store as a destination to attract consumers, accompanied by smaller retailers serving as a diversion that will stimulate impulse buying en-route to the main event. In Britain the relationship between the high street and shopping mall has been one of competitive enmity ever since the out-of-town developments of the 1970’s and 1980’s began siphoning consumers away from traditional urban high streets. While British out-of-town development came to an end in the early 1990’s under New Labour, its legacy can be seen in the many mono-functional high streets that adopted the shopping mall’s tricks to remain competitive in a crowded consumer market. But if these mono-functional high-streets live by the laws of the shopping mall these laws may also serve as their downfall. This is what appears to be happening in Aldershot and on many other high-streets nationwide. Without a destination there is no attractor to draw in consumers, let alone stimulate their tendencies to shop impulsively.

Viewed through this lens and in this scenario the death of the high street seems like an inevitability. Conversely, we could be mistaking the symptoms for the cause. The changes affecting Aldershot high street may, in fact, reflect the changed nature of the retail landscape as a whole. Aldershot’s present situation reflects a historical idea of what a high street should deliver, while the closure of its anchor store speaks of a retail landscape that is already understanding this and moving on. Rather than life or death, the question of the high street’s future might be better explored as a meaningful evolution.

To explore the nature of this evolution we must first be clear about the changed nature of the retail landscape. For almost two decades e-commerce has made itself a part of the narrative around how and where we consume. If this was previously a binary choice of which physical environment to shop in – the authenticity of the town centre high street versus the convenience of the shopping mall – e-commerce has changed the terms of the discussion entirely. Why drive to buy your products when they can be ordered online and delivered straight to your door? Why seek out the advice of an honest local retailer when there is an abundance of information, product reviews and 24hr customer advice ‘chat bots’ available at your fingertips? 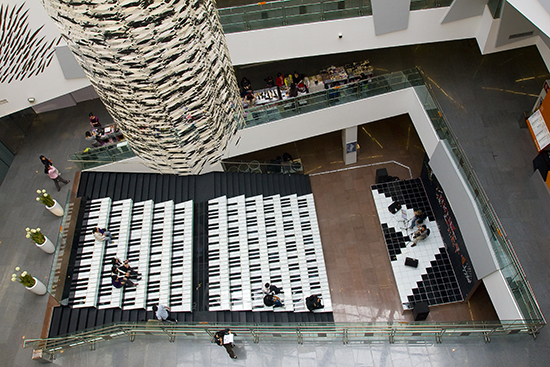 Consuming in a physical location is no longer a necessity, it is a choice. In turn, this choice must be bound up within a fundamentally changed idea of what a retail destination can offer. Historically this destination was the one-size fits all umbrella of the department store which was home to a range of goods that catered for the scope of family life, leisure and work. Faced with the sheer breadth and volume of goods now available on the internet, the scope of offering from these historic locations feels rather paltry. Accordingly, everyman retailers such as Marks and Spencer are seeking to stave off obsolescence by scaling back their large-scale operations and delivering a smaller, more agile high street presence in locations with the right kind of footfall. If this move is an acknowledgement that the conventional department stores of old are no longer the destination that makes the high street tick the question turns to understanding what a new idea of destination might be and how this can underpin a new set of dynamics on the high street. 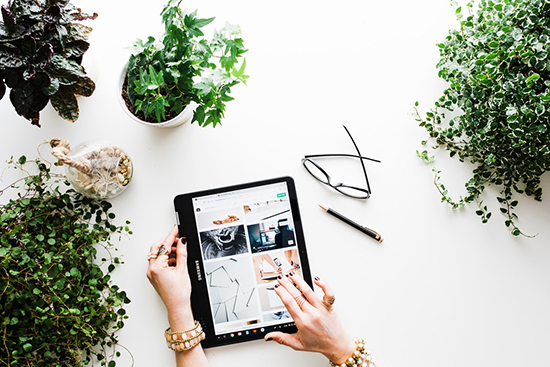 The rise of social selling:

E-commerce has clearly won the war for ultimate convenience, but more importantly it has forced a re-evaluation of the way that each type of offering in the retail landscape interacts, one that sees these relationships as complementary rather than competitive. Each must now be re-thought as something more than a machine for selling and instead as an experience that is more integrated into our patterns of day-to-day living. The rise of ‘social selling’, or selling through social media channels may point to ways in which this might happen. Facebook, Pinterest, Instagram, Twitter et al now integrate the ability to shop within their social platform rather than sending you to a dedicated site tasked with the business of selling. Online shopping, in this sense, becomes part of a larger social landscape and is embedded in an online destination that is about connecting with friends and sharing experiences. The physical idea of destination, in retail terms, must also move beyond the idea of an anchor or department store to instead consider the sum of parts that make the environment as a whole and how this can deliver an experience that reinforces the appeal and identity of the high street for its users. 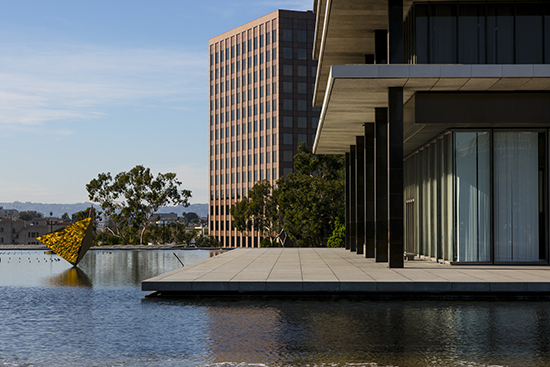 In recent years the more conspicuous examples of this shift in the UK have taken place under the auspices of mall-led urban regeneration in schemes such as London’s twin Westfield’s, Liverpool One or Birmingham’s Bull Ring. These are large scale schemes that physically re-make the idea of the high-street by splicing it with the logic of the shopping mall that often feel rather formulaic in spite of the large numbers of people that use them. Despite the urban niceties they are machines to shop within and represent a top-down approach that remains influenced by the more formulaic principles that have influenced historic approaches to retail design.

More interesting incremental approaches can be found if we cast the net globally. The transformation of Los Angeles’ Abbott Kinney Boulevard from a troubled inner-city area to a global retail destination in little over 30 years puts forward one alternative to how we might think about the future of the UK’s high streets. The transformation that took place here was one that built upon and enhanced the existing physical qualities of Abbott Kinney Boulevard – planting palm trees, installing crosswalks and other urban niceties that made its existing spaces hang together as a more pleasing urban whole. 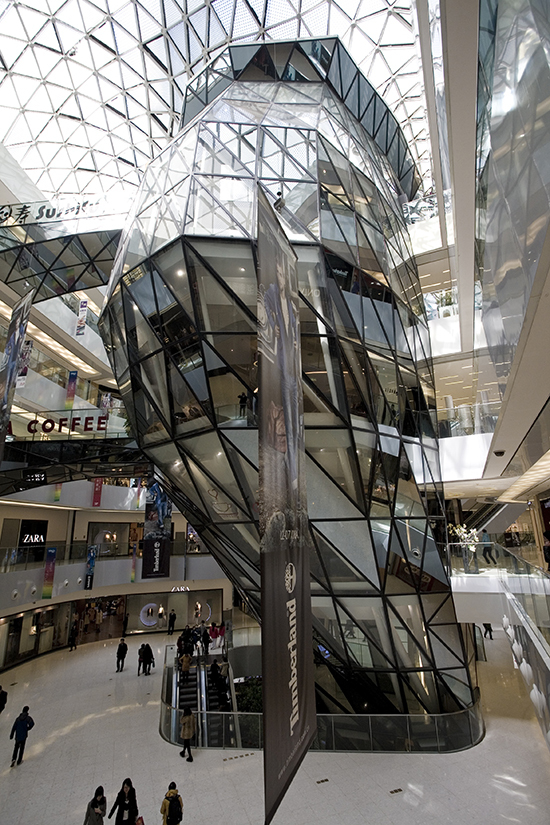 The fundamental thing about this transformation is not that it has used a particular retail trick to draw consumers in, but rather, it has made Abbott Kinney Boulevard a destination in itself. The destination is the destination. This may seem blindingly obvious, but it represents a sea of change in the thinking behind these environments. For a shopping mall, or for that matter, Aldershot High Street, the destination was a carefully stage-managed moment within a larger architectural ensemble designed to shape this experience. Here, the existing architecture of the boulevard is allowed to breathe and become a pleasing environment in itself. It becomes a place where people stop and spend time. The emphasis isn’t so much on providing the most effective architecture for selling as it is on creating a distinctive, sociable environment that plays on its historic attributes. It allows its inhabitants to socialise with the goods on sale (secure in the knowledge that they may buy them online later or choose to consume in person). There is a more seamless overlap between consumption and the public, built around sociable rituals and events that attract people to a particular locale.​ 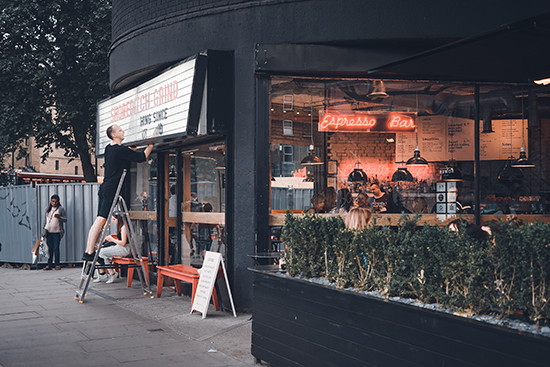 Abbott Kinney Boulevard’s success is also the factor that its critics believe has led to a certain demographic cleansing of its surrounding area, removing many of the counter-cultural influences that shaped it in the first place and leaving their traces in image only. In some ways this is familiar as the story behind the gentrification of many successful cities and is a process that brings both good and bad in its wake. It is also a reminder of the effect that retail and consumption can have in changing the demographic profile of an area and the manner in which these spaces can form psychological barriers for the inhabitants of the city when there is little else but the business of buying on offer.

The challenge for designers is to balance the fast-moving world of retail with the wider fabric of our cities to create spaces and events in destinations that provide a unique experience. Not only this, but these spaces should be able to adapt and be welcoming to all. Pop-ups such as Boxpark and Pop Brixton have proved adept at creating temporary destinations that mesh more convincingly with their urban locales than mega urban malls such as Westfield and have in some cases become more permanent than originally intended. For us, the point is that the high-street must be reclaimed as a vital part of the experience of our cities. It isn’t a task-oriented machine solely devoted to making the business of consuming more efficient and in many ways it is a shame that it was ever considered this way. The high street is the centre of life in a city, parts of it live and die at different times and mean different things to different people. It must celebrate this status in the range of activities that it caters for over each 24 hour period, acknowledge and accommodate how it changes over time, and proudly display the traces of its history in its re-use. 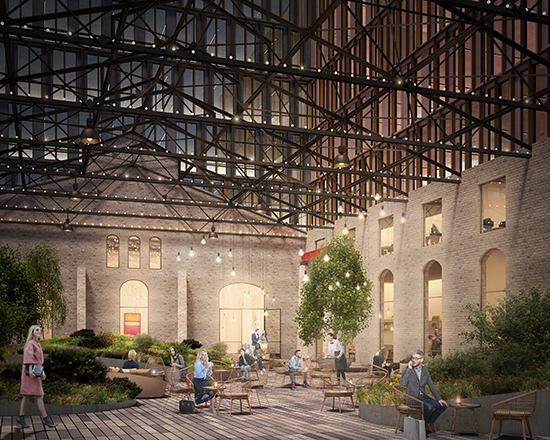 We have put these lessons to use in our Romanian project. Here, we have been tasked with creating a new destination on a former industrial site in central Bucharest. The easiest solution would be to level the site and start again with the kinds of shopping malls we are now seeing colonise the edges of urban London and other major cities. We, however, have chosen to learn from the lessons we have seen here and create a destination more intimately connected with its history. Retail will inhabit and re-use, but not dictate the preserved industrial structures that colonise the site, creating an architecturally distinctive mixed-use location that intrinsically woven into the history of Bucharest. Here, shopping will not be a standalone activity that bypasses everything else and will instead be one part of the social activities that take place in this urban hub.

The future of the high street must reclaim its spaces as part of the social fabric at the centre of our cities. Rather than seeing the empty spaces of vacated anchor stores such as Marks and Spencer as the end they should be understood as an opportunity to re-inhabit the city with activities and events that make the urban realm vital. It is time for the high-street and the city to re-connect.